The platform also offers the ability to create projects, define own parameters, field diaries, mapping and presentation, communication among users, as well as specific functions for particular users, for example the tailored reports for Birdlife Sverige or the Flora Guardians.

Observations can be reported from desktop PCs or via mobile devices. The checklist feature enables the user to generate a checklist of species likely to occur at a particular location on a particular date. By confirming that all species that were seen and identified are reported, the observer submits a complete list and the species not observed become important zero-observations. Reporting modules, for example the checklist feature or the Invasive and Alien Species (IAS) reporting module have been built using Artportalen’s API. This API has also enabled third-party developers to build apps to read information, report observations or both.
An alarm service is under development enabling users to receive a notification when relevant observations are reported.

One feature of Artportalen is the manner in which the data has become fundamental to environmental management in Sweden. Authorities and governmental agencies, via their own web interfaces, use data from the platform as a primary source of information on biodiversity. As such, the platform plays a pivotal role in governance and decision-making and leads to more transparency in the decision-making process since the data used is open to everyone. 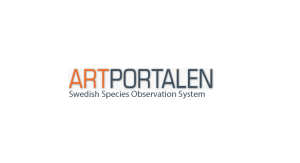