FASTCAT-Edge: build your own smart camera trap to record only videos and pictures of wildlife activity and quickly identify the species names.

What is it?
CO-DESIGN highlights
DOWNLOAD THE INFOGRAPHICS
FAQS

Do you want to get updates on the latest news, activities and progress of FASTCAT-Edge? 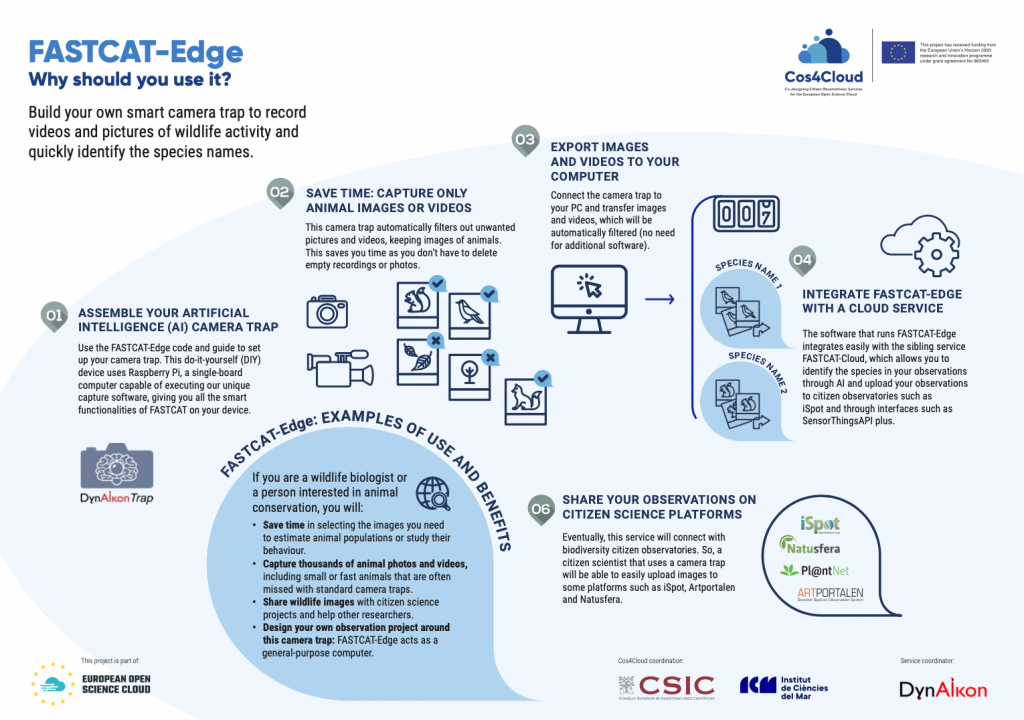 FASTCAT (Flexible AI SysTem for CAmera Traps)-Edge allows you to assemble an AI camera trap that:

(1) Automatically filters out most unwanted pictures and video streams, keeping images of animals. This saves you time as you don’t have to delete empty recordings or photos.

(2) The camera trap uses bespoke Artificial Intelligence (AI) to automatically identify whether a scene contains an animal or a human, ie, this allows you to only keep animal scenes.

(3) Eventually, this service will connect with biodiversity citizen observatories. So, if you are a citizen scientist who uses a camera trap, you will be able to easily upload the picture to some platforms such as iSpot, Artportalen or Natusfera.

Development & how it works

This camera trap consists of an architecture that records at all times and uses some AI to decide when the camera trap needs to be triggered. So, it captures the best frames when needed. The system is very innovative because the camera is always on and looking for animals and when the system ‘thinks’ it has spotted an animal, it keeps the image. So, there is little delay from motion being detected to the image being taken, while other camera traps often miss the right frame because it takes too much time for them to react. For example, if there is a lot of motion, that doesn’t mean an animal just passed by; it could have just been leaves falling from a tree. The idea is that this system can tell the difference.

The animal-detection machine-learning model integrated into the camera trap also detects small animals that are sometimes missed with standard commercial camera traps because they need a minimum heat threshold to be triggered. It also is better at detecting fast animals because there is almost no delay from motion being detected to the image being taken.

How can you create your own smart camera trap?

Use the FASTCAT-Edge code and guide to set up your camera trap. This do-it-yourself (DIY) device uses a Raspberry Pi, a single-board computer capable of executing the bespoke capture software and providing the smart functions of FASTCAT, embedded in your device.

We are working on this service, it will be available soon!

Innovation for the camera trap community

Code and guide to build your own smart camera trap: 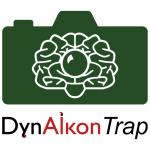 Yes, FASTCAT-Edge is a general-purpose computer so you can design your observation project around this camera trap.

It depends whether your camera trap system is open or not. However, you can also use the FASTCAT-Cloud website, which has the same functionalities: it filters out unwanted images/videos and helps you identify the species names.

Yes. The animal-detection machine-learning model integrated into the camera trap also detects small animals that are sometimes missed with standard commercial camera traps because they need a minimum heat threshold to be triggered. It also detects fast animals because there is no delay from motion being detected to the image being taken.

Yes, the system can detect humans (as an animal class) and they can be removed or counted as such. However, we do not provide recognition of any other features (gender, etc.), just the label ‘human’.

Most of the attendees who answered the post-event survey would recommend the co-design session to a friend.

%
Most of the attendees who answered the post-event survey have learned useful information about how to apply co-design to citizen science.
"I enjoyed the event; the thing I liked the most is that it was interactive!"
"During the event, I was very impressed by the co-design approach; also, I liked hearing about DynaIKon and what they're working on."
"I liked the event because we got so many perspectives and answers about these two services!"
Previous
Next

Want to join the co-design community?

Interact and meet other professionals working in your field

You will be able to network with other professionals and projects.

Be an active part of the open science movement

Cos4Cloud's technical services are open source and are intended to be adapted and improved by the community involved.

Also, we will tell you how we have applied co-design feedback in developing the service at the end of the project.

Let's co-create and test FASTCAT-Edge!
click to join us