AI-GeoSpecies: Integrate artificial intelligence into your citizen science app to predict which plant species users will find in a particular area. 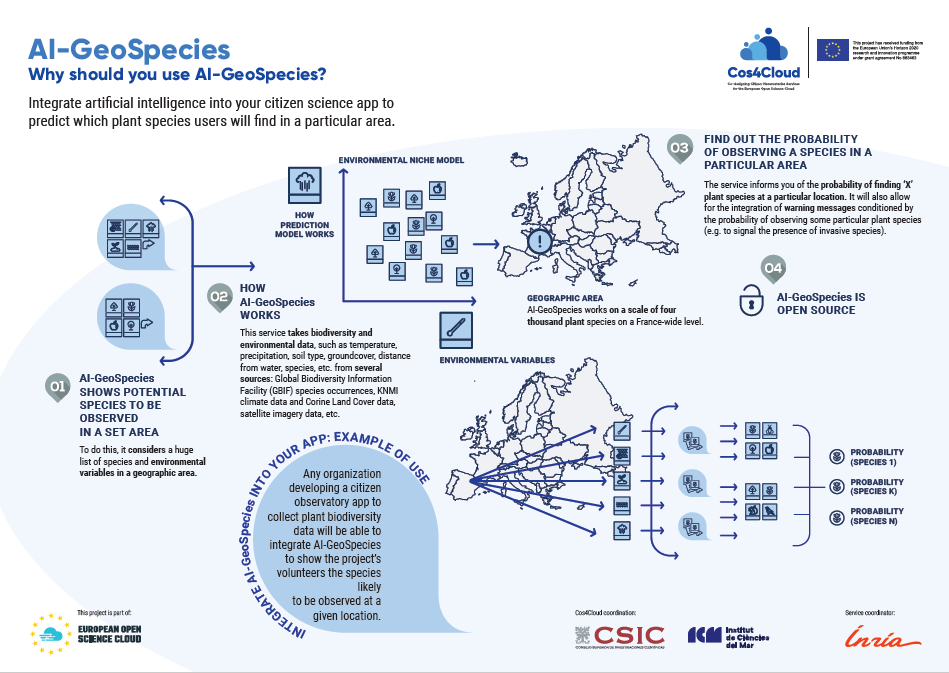 Web service that shows potential plant species to be observed in a set area. Currently works on a scale of four thousand plant species on a France-wide level.

What is usually done in ecology is to predict the distribution on the basis of a representation in the environmental space, typically a feature vector composed of climatic variables (average temperature at that location, precipitation, etc.) and other variables such as soil type, groundcover, distance from water, etc. Our methodology will be to revisit such approaches using big data and deep-learning techniques.

This will require developing a complete information system aggregating data from several sources(e.g . GBIF species occurrences, Chelsea or KNMI climate data, Corine Land Cover data, satellite imagery data, etc.) in order to train a large-scale predictive model and deploy a web service on top of it. In terms of quality control, the service will provide indicators of the occurrence probability of the reported species and allow users to execute probability range queries (e.g.to focus on common or rare species in the location spot). It will also allow for the integration of warning messages conditioned by the probability of observing some particular species (e.g. to signal the presence of invasive species).

Example: A start-up developing a gamified citizen science app will be able to suggest the species to be observed at a given location.

Automatically predicting the list of species that are the most likely to be observed at a given location is a key technology for many research domains, as well as practical usage in sustainable landscape management, environmental education, ecotourism, etc.

This is challenging as it is not usually possible to learn species distribution models (SDM) directly from available spatial positions because of the limited number of occurrences and the sampling bias. So far, there is nothing similar available.

Developers with some experience in web technologies.

It is a web service to integrate into your app but not an app itself. It is also integrated into a web application (beta version) released by Pl@ntNet: https://identify.plantnet.org/prediction.

The service is more adapted to one-off queries or specific small-scale areas (e.g. a few kilometres).

Yes, AI-GeoSpecies will allow the integration of warning messages conditioned by the probability of observing some particular species (e.g. to signal the presence of invasive or endangered species).

No, AI-GeoSpecies is not a mapping tool.

So far, AI-GeoSpecies works for about 4,000 plant species.

We are working on this service, it will be available soon!

Help us to co-create and test the new generation of services for citizen observatories!
click to join us